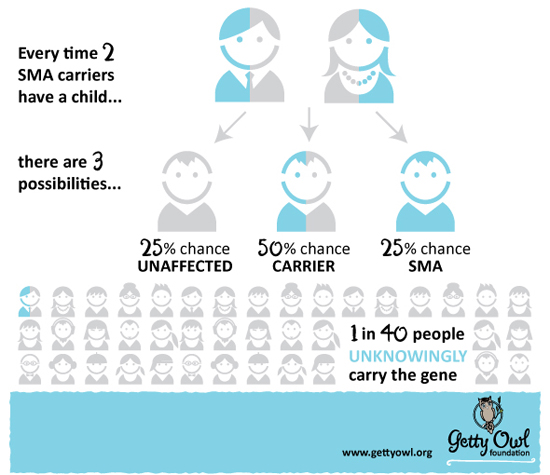 Could you be a carrier?

Yes! You could be a carrier of SMA even if no one in your family has SMA and even if you already have children without SMA.

Carriers of the abnormal gene for SMA have no symptoms and are not sick.

About 1 in 40 people carries the gene, which is over 10 million Americans.

How can I get tested?

For those interested in Genetic Screening for SMA and genetics in general there is a terrific organization called JScreen. They help individuals and families with the genetic screening process, education, and post-test support for anyone.

What if both parents are SMA carriers?

You may want to seek advice from a genetic counselor to discuss all of your family planning options. For each pregnancy, there is a 1 in 4 or 25% chance of having a baby with SMA if both parents are carriers.