This may be a long post, but please know that there is a method to my madness (or long winded post, whichever you’d like to call it).

Before Getty, I used to run a lot. A lot. I had not ran a marathon, but that was next on my list. The planner in me had literally scheduled out all of the training weeks and races leading up to the California International Marathon. I was preparing for that grueling 26.2 miles for the entire year really. I was in the middle of a 4th of July run when around the 4th mile my body completely shutdown. Like I couldn’t move at all. Turns out that was Getty’s way of telling us that a) She was here (we had no clue we were pregnant) and b) That I needed to chill out with the running and take a break. So after the tests came back positive and we were with baby, well I pretty much stopped all activity.

I knew you could exercise but I was so freaked out that I would hurt her, that I seriously stopped cold turkey. I walked, but that was pretty much it.

At around 8 months I purchased a Road ID bracelet. You can put all kinds of information on it just in case of an emergency on route, etc. There was one line left on the bracelet that I could add info, but I didn’t have anything else to add. So I wrote, “Doing it for Getty!”

Mind you we had not “met” Getty yet. Turns out she waited well into 41 weeks to meet us. 🙂 But there was something weird about me writing that on the bracelet. What was for Getty? And why was I putting that on an emergency bracelet?

Life has such a weird way of staging events that will happen in an uncertain future for just the right reasons. Since Getty’s dx I have not run, I have not exercised , I have not broken a sweat like I used to everyday. My time and my devotion is to Getty and only to Getty. In my mind and in my body, every day was like running a marathon.

Making sure she had everything she needed, constantly monitoring her, suctioning, preparing for what could happen and when some scare would occur, breathing treatments, being able to jump in a nano second to fix the problem and remedy a solution. Sometimes it is as simple as repositioning and then to the opposite extreme; resuscitating her. My legs may have needed a good run, but my brain and my heart were working overtime. Caring for a child that is so medically fragile can fatigue you and you don’t even realize it because it becomes routine and your new normal is normal.

I was not eating, I was losing weight, I was in this anxiety ridden world that I could not break from. I was just so scared that if I was not hovering over her, that something drastic would happen and I would not have my “A” game to help her.

What I am learning now, and mind you very, very slowly is that I can’t be the best mom I can be unless I do break away and get time to do things that make me feel good, like running. I remember the first time I geared up and put my running shoes on for the first time in well over two years I just cried. I cried because I was leaving her for a half an hour for myself. I felt so guilty. But I will tell you this. After I put on my shoes and I reached for my timing watch, my Road ID was leaning right up against it. I grabbed it and put it around my wrist and saw the inscription of “Doing it for Getty”, and I knew I needed to get out, sweat, run and burn off all of this frustration I have been harboring for so long.

SMA frustration sucks, hands down. It comes in all forms and that first run I took was an amazing experience. I felt my legs move at a speed I remembered and cherished. My knees were a bit weary, but strong. Overall I did run for a half and hour and it felt awesome. I have no idea how far I went, but whatever the distance it felt like a victory and I wanted to celebrate. I ran inside the house and could not hold Getty long enough. The guilt I thought would follow me on my run had gone away and I even started to think about the next time I might be able to get out.

So fast forward to last Saturday. The Recon Run in Tracy was simply unbelievable. I wish I could bottle it up and keep those memories alive for my entire life. It felt invigorating, it felt empowering, it felt right. I did not want my Road ID to take the burden of all of the mud, but I did bring it with me, to remind myself that I am a better mom for Getty because I was doing something that was helping me mentally and physically.

We had such great support that day. Well over 20 people participating with us. We all had on the same t-shirt. SMA Warrior seemed to be a very fitting statement

I got the privilege to be with two other SMA moms, Meri and Jen you gals rock! It was an honor to be there with you. Two members of our GOF board was there as well. Takoa and Morgan, we kept together as a team and “killed it.”

The run itself was something that I think all people need to experience. The very first obstacle was a water slide to a pool of watery mud. Once I hit the water, there was no going back, it “was on!” And that really was the theme for the entire run. Tires, carrying bags of sand, going over and under into muddy water, jumping over 4ft walls, running up and down sandy dunes, etc. But you know what there was not one time I wanted to even complain. I kept thinking about the phrase, “We run for those can’t”. I had no business complaining when my daughter fights for her life every day. So I kept pushing and pushing.

The 12ft wall I was so worried about, nothing but a few planks of wood and a rope. We scaled it like it was no one’s business, it was awesome. I can’t even swim and the last leg of the race as swimming. I had no business being in there, but I did it with the help of my team.

Running across the finish line was a complete affirmation of strength, both mentally and physically.

Rejoicing as a team was a great experience. Hugging and cheering for a job well done felt so good. Oh and the beer was freezing cold. No one got hurt. 🙂

I have learned many things since Getty has graced us with her presence. One really important lesson is to listen to her and follow her lead. She has never led me astray and I think she has been telling me that I need to get out and do what I love to do. She is right, it only enriches our time together.

So Mark and I have been working on a new schedule that will give me about an hour a day to get out on the road and exert whatever I need to get out of my mind, process what is in my mind, and give me the time to clear my head and heart so I am ready for Getty to fill it up once more.

I think the only thing I would pass on is the gravel in the teeth. That was a new experience. 🙂

Here is a collage of the Recon Run. Some pictures were off the website. 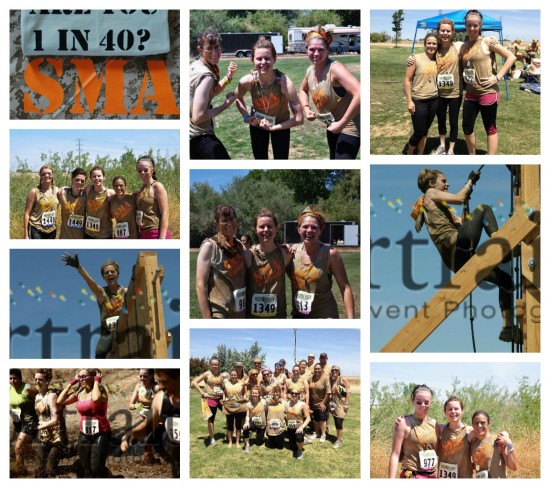