In certain ways I have been excited and bummed about writing this post. There have been so many exciting things happen this summer and I wanted so much to write about it and then something equally will happen and then something else. Well needless to say I got behind and the I started to get bummed because I wanted each cool thing to have its own post. Alas, in order to get everything down in an attempt to not forget anything, it will just need to go here. 🙂 So hold you hats and buckle your seat belts, I have a lot ground to cover.

In July we were able to take Getty for a week a) out of the house and b) to a “remote” area to just relax. It is not easy to find a space that will accommodate boxes and boxes of supplies, equipment, vital back up equipment, and honestly the kitchen sink. A couple of days away is an undertaking so think of how crazy it would be for an entire week? Yay that is exactly what I am talking about. Nuts! The van was packed to the brim and so was my Mom’s van. Oh didn’t I mention Getty’s stuff also is too much for her van, we have to have an entourage of people and stuff to make this happen. But you know what? IT IS ALL WORTH IT!

I found a house with an open floor plan on Airbnb. What a great site to find what you need and it is also incredibly affordable. A week at a hotel would have been way out of price range, but renting a house with all the amenities was really the best option for us. I found a spacious house in that was going to be perfect for all of needs. The area was quiet and remote and it was just perfect for what we needed. The last time we had taken Getty for an extended trip was a few years ago. So we saved to make it happen this year. It was kind of a beautiful feeling and a sad feeling at the same time. We were so excited for her to get out of the house and be in a new environment, but as her mom I was also trying to hold onto every sliver of time with her before she went on to Kindergarten. I knew time spent together would be different as soon as school beckoned in August.

Once we made it to the house, the unpacking began. As Getty watched a movie, the rest of us wiped down every inch of the house. Vans were unloaded, machines were set up, and supplies were organized. As I type this, I kind of chuckle because I wish I could just write those three things and have it be that. But there is so much involved with unloading, setting up, and organizing. 🙂 If there are any SMA parents reading this, you know what I am talking about. For those that do not, I will spare you the details of what it takes to make sure that everything is ready for a week. I should have just taken a picture. Here is the best I can do for now. This is right before we left. Aside from the Pepsi, the rest is Getty’s private entourage. In order to make sure Getty has everything, well everything needs to come with us. 🙂 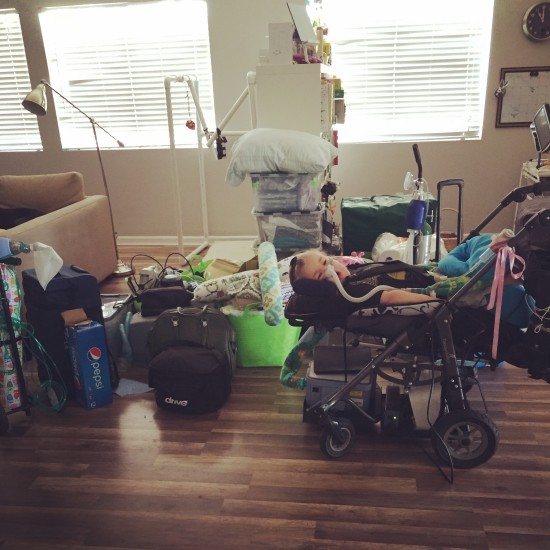 The house offered a few things that we were looking forward to: Relaxing environment, beautiful space to be consumed by, and really a place that was as accessible as we could get for Getty. I think we did pretty good. Oh and they had a hot tub. That worked out good. I was able to get Getty in the hot tub the first night. She looooooooooved it. It was beautiful to watch her float in the warm water. Gravity is not kind to any child with SMA, let alone type 1. Once Getty was in the water it was a beautiful sight to watch her slowly move her arms and legs. She giggled and squealed as I moved her around in the water. 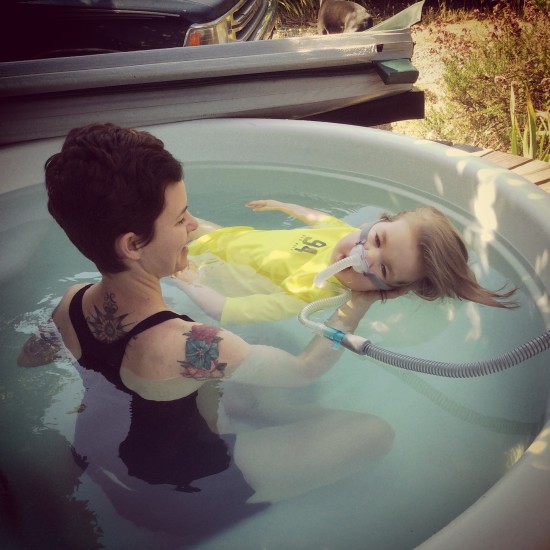 The trip was a hit. Lots of books were read, music was sung, memories were made, and the trip really was worth it. Oh and Cooper got to go, so that made him happy. 🙂 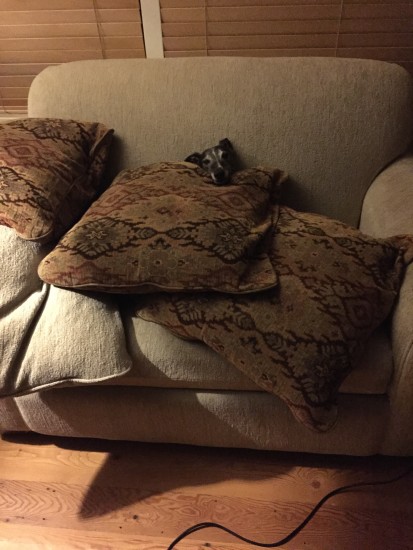 Honestly, he didn’t move much in the five days we were there. I don’t blame him. With the occasional trip outside when nature called, he was pretty much right here all week. 🙂

I think the best part of the trip was that we didn’t have to go anywhere or do anything if we didn’t want to. Sure, the usual care was taken as it always is wherever we are with regards to Getty’s care, but other than that there were no doctor appointments, no rushing around to get somewhere at a certain time, no stress of making sure something was done, and no phone calls or emails. It was a nice break from reality for all of us I think.

Once we got home it seemed to be back to the daily grind of things to do. I know Getty really enjoyed the trip and I know she appreciated having a better rested mother by her side. I know she gets annoyed when I am stressed and I don’t need to. 🙂 I would be annoyed by me as well. 🙂

So as the summer started to wind down and before school started, Getty started to do something we were not sure we would hear. She started to talk. Getty seemed to blossom over the summer and now she had decided to truly communicate her needs and wants. Well ok we will take that! It is not easy to decipher what she is saying to most people, but in her muffled voice she started to respond to questions with pretty good precision. To which point I freaked out and could not stop crying. It was an astonishing moment. It was a beautiful moment and it is even cooler that she continues to this day.

Getty’s respiratory strength has always been stronger than her arm and leg movement. She could always belt out all kinds of sounds to us and it seemed as though throughout the summer she began testing that strength with formulated words to the best of her ability. Now that she is in Kindergarten, she is reading books and that not only is blowing our minds, but she loves to read and the fact that she is reading out loud is seriously the icing on the cake. We are so proud of her and we can only imagine how rewarding it is for her to truly feel heard. She never seemed frustrated in the past if we had a communication barrier, but it seems like now since the door has been pulled off its hinges, she thinks it is pretty cool. 🙂

So what else? Getty flew a kite, worked in her powerchair, lots of walks, mama snuggle days, a night at the Rivercats, Saturday swing days, watched tons of musicals, read copious amounts of books and we read all sorts of chapter books to her. Some of her favorites: Captain Awesome, Captain Underpants, The Neverland Girls, Ivy & Bean, Ulysses & Flora, Heidi Hecklebeck, and many more. Our library is seriously out of control! We went to see the movie Inside Out. She enjoyed the movie a lot. 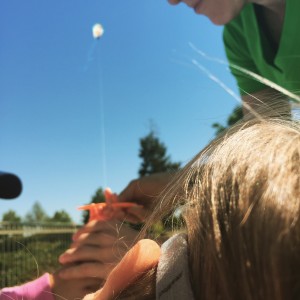 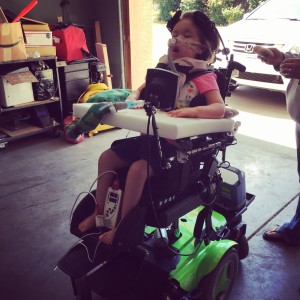 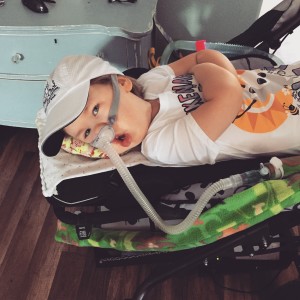 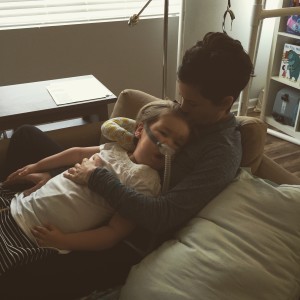 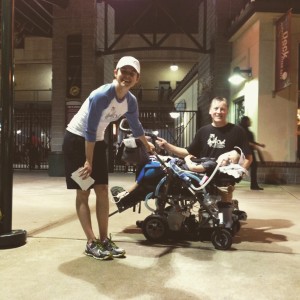 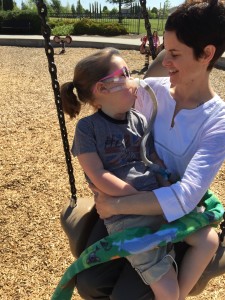 So there you have it, Getty’s dance card was pretty full. Next up…………….Kindergarten! Here is a sneak peek. 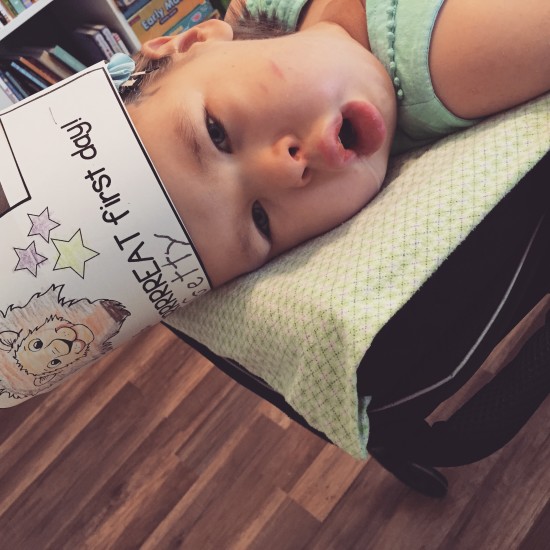 Getty thank you for letting your entire village be a part of your life. We all are so thankful to be a part of your journey. I know I can speak for all of us when I say that you touch our lives every single day in a new way. Your smile absolutely trumps any care we may have. Your spirit transforms us into better people. You are a gift and we are so jazzed about what it to come.