Move Over Mom and Dad, I Am Watching Sesame Street!

With any toddler, I would guess that there are just not enough minutes in the day. Feeding, napping, “school”, reading, play time, bath, music, etc. Fitting everything in never seems to be in the cards.

Since Getty is getting older, I am trying to really find engaging things she enjoys. Before, playtime was more of a mom based decision. I would do activities her based on what I thought she would enjoy. As long as I didn’t hear any noises to tell me otherwise, I just assumed Getty was enjoying it. She does a very good job of non-verbally telling Mark or I when she likes and doesn’t like something for the most part. Sometimes it is seriously apparent when she doesn’t like something. She will pucker her whole face up and start to cry. It isn’t what I would call a real cry, more of a “Getty” cry. “Don’t make me step this up a notch”, kind of cry. 🙂

So as she has gotten older, I think in some ways she is growing out of some of the things we do, but that is the hardest thing to judge. I try to do activities with her that are at age level, but I am finding that she is literally bored doing them. Take last night for instance. We have animal flash cards to help her recognize and learn her animals. We are also working on her eye gaze skills, so as she develops, she can use her eyes to tell us what her needs are. A slow and steady process indeed, but will be so beneficial for all of us in the near future.

Okay so the flash cards. I would hold one up at a time and say the word as she is looking at the card. Then I would take two different cards and have her pick with her eyes, which animal I am asking for her to look at. I’ll just say this much. She knows how to do it, but she takes to another level, she gives me the teenager eye roll as if to say, “The cow is on the left, duh!” So instead of stopping, I continue through the activity and quickly move onto something more challenging before the sassiness escalates.

The books we read to Getty are also not age appropriate, it just seems as though her brain, while not at all affected by SMA, is working overtime and this mom needs to catch up. 🙂

Which leads me to Sesame Street.

Mark and I cut off our cable about two years ago. It just wasn’t worth the money and we were finding that we weren’t really watching much TV anyway. We recently got it back, not quite sure why, but it has been nice to have some extra channels, so after Getty is sleeping, we can kind of veg out for a little.

Well we found out that we have this feature called On Demand. 🙂 I know we are a little late. But anyway, the “Kids” feature is terrific. I was flipping through the shows and stumbled upon Sesame Street. My ears perked up and I thought, “well maybe Getty might like this, but is she old enough to understand and enjoy it?” Um………yep!

I turned it on and I am not kidding you, she instantly perked up. She laughed with such great timing. She was instantly engaged with the letter of the day, which ended up being the letter “O”, no kidding. And wouldn’t you know it, the first word was an animal named, “owl”. This couldn’t be any better.

Getty enjoys the characters, the constant singing and the quick snippets of number and letter learning. She also likes the classics, which makes Mark and I happy.

So now we have found something new, something challenging in her daily routine, and something that we can all take part in … or at least I thought. You see when Sesame Street is on, well, Sesame Street is on! Mom and Dad don’t seem to exist. Which you know is kind of a good thing right now. It has been difficult to find ways for Getty to be completely independent.

She has her iPad and her arm slings to manipulate the tablet. She has a really cool mirror that plays music to her and teaches her colors. She can do art on her own, again with the help of arm slings. Music she loves, but we are usually doing that together. She loves playing with musical instruments, and we are playing together as a family. Again it is always nice to see her have some independent time on her own, where I am not totally up in her “grill”.

So last night we watched Sesame Street together. I asked her if she was enjoying herself and she gave me the teenager eye roll, but this time is was different. It wasn’t a “this is so boring” look, it was more of a……” Mom! I am watching Sesame Street!” And that felt awesome!

Oh and if you were wondering what monsters she likes so far, it seems as though Super Grover and Elmo have her heart right now. 🙂 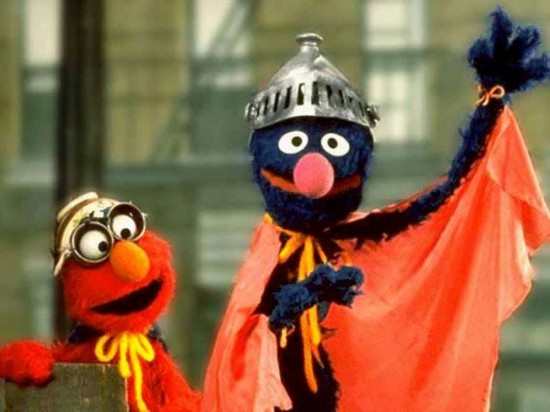