I took Cooper outside to potty in the back yard. I looked up in the northern Sacramento night sky and saw what appeared to be a bright yellow flame hovering high. I watched it and couldn’t figure out what the heck it was. I wondered if it was a rocket or missile.

The light drifted overhead and went dim. It then appeared as a dimly glowing blob drifting across the sky. I thought maybe it was a rocket going into space and it had started to escape my view.

The dim glow moved steadily southward across the sky.  It eventually passed the roof-line of the house. I couldn’t see it anymore.

I went out to the front yard, and it was gone.

I looked northward again and saw another bright yellow light in the sky. Then two. Three. Four. Five! I tried to take pictures and video, but it was just too dark out.

One of the lights hovered and went dim, just like the one before. It looked again like a dimly glowing blob drifting across the sky. I could barely track it with my eyes.

Then it started to descend. It looked close to me. It drifted downward and almost looked as if it would land in the thick grassy field across the street from the house. It did! I went to investigate.

As I stared into the field and walked toward the landing spot, something big suddenly came into my peripheral vision and looked like it was about to hit me in the head!

It hit the middle of the street, and I was freaked out. It was dark and I had no idea what it could be. I started frantically snapping pictures with my phone.

Here it is lying in the street… 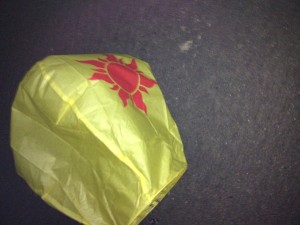 I should mention, Getty absolutely loves the Disney Movie, Tangled. If you haven’t seen it, Tangled is the story of Rapunzel. An important part of the movie deals with the launching of sky lanterns: mini airborne paper hot air balloons, launched by hand, with a slow flame underneath. 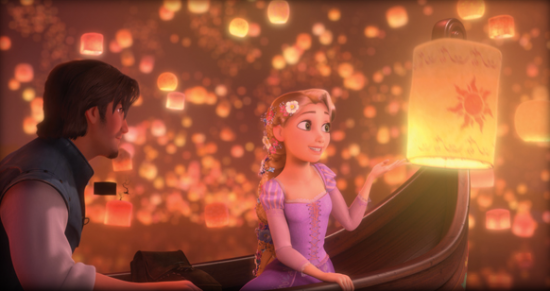 It’s got the same sun on it.

Someone calculate the odds of this: (1) take the dog out just in time to spot a sky lantern hundreds of feet in the air; (2) it blows around and ends up almost hitting me in the head; (3) it turns out to have a design on it from a family favorite movie.

What does it mean?