Before we moved, Mark and I put together some non-negotiables of what we needed in a house.Here was our list.

Our old house was almost getting dangerous for Getty. The hallways and bedrooms were very narrow and getting Getty in and out of the bathroom started to become a hazard.

We came across this house in a neighboring city and just fell in love with it immediately. It covered all the items of our list perfectly. What we didn’t realize was that there were some added features to the house and to the neighborhood that made moving even more awesome.

The kitchen and dining room are kind of one and so there is tons of space for what we call Getty’s Art Corner. She has space to have a easel and a bookshelf for her books. paints and markers, etc. It is also big enough so we can have her PVC pipe gym to hold her arm slings so she can rock and roll on activities.

We try to get her up in the arm slings at lest once a day. Today she was using her markers to draw a beautiful picture.

I captured as much as a could. She is laying on her 8′ wedge in her arms slings with a marker. There is also a amplifier next to her with the mic near her mouth. We are trying to encourage her to talk more and the thinking is if she can hear herself that might encourage her to talk more.One more thing. I don’t know if this is a two year old thing, but when she sees that I am watching her do different projects she gets a little sassy, as if to say, “Mooooooooooom, stop watching!” I love it.

While we were moving into the new place, we started to realize all of the great perks in the neighborhood. 1st and foremost, there is a Target about a quarter of a mile away. Dangerous! But most importantly there is a school two blocks away. The school Getty will be going to when Pre-school comes to call. Our neighborhood also has a cool duck pond. We have hung out there many times to feed the ducks. One night Grammy and Papa came with us and we all had a great time. Some of the geese were a little more aggressive than others, but all in all I think everyone got fed. The first time we went, Getty was super quiet. We can only imagine how much she was taking everything in. And as we began to go more often, she started to chat more. 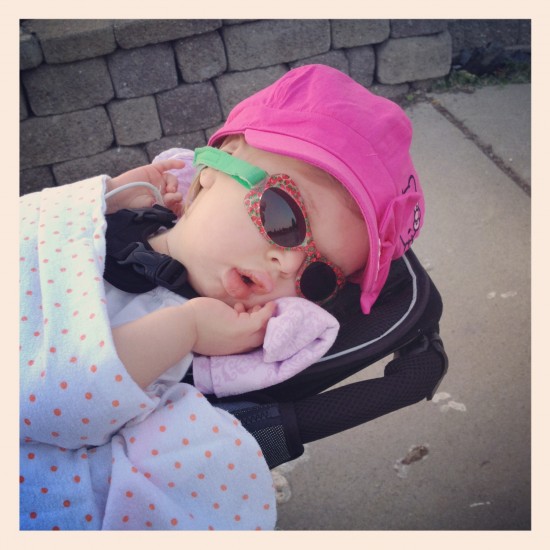