Technically a little over three years ago I was pretty much as big as a cow. Getty was “supposed” to grace us with her presence on March 14th, 2010. I remember the doctor telling me, “you know due dates are not always accurate.” Looking back on March 14th, then 15th then, 16th, etc. I started to get the point. Her room was all ready to go, right down to the last detail.

My original plan was to start maternity leave from teaching the week of and then come back after the 6 weeks were up. Mark and I had it “all planned out”. (If you don’t like my “quotations  ” I do apologize, but since this is my way to emphasize to myself how incredibly stupid I was to “suppose” anything in life, I will continue to use them :)) Once we got to March 16th I had an appointment with my doctor to see how far along I was. 3 cm dilated. Well yahoo, it is only a matter of time now. I thought maybe I should just stop work now? I mean she is coming any day, minute now, right?

The days continued to pass and that 3 cm seemed to not really care that I was ready to have Getty. Nope it just resisted and was stubborn to hand over the responsibility to 4 cm. By March 19th I had declared that I would just continue to work until I needed to not. My “plan” was not working out and so when I get frustrated I just do what I know best. Push on and move forward. What I really continued to do is literally waddle for the next 4 or so days teaching my lessons. Getting my AP US History kids prepped for their big test in May. I hated leaving them so soon, so to feel better, I stuffed their heads with the remaining information to then let them digest it until test day. It is amazing what you can do when you have no time but have a passion for overwhelming a classroom of eager teenagers. We went through the Civil Rights movement in two days. Martin Luther King Jr., if I had to guess, would be pretty upset with me. I am sure he never intended for a teacher to Clif Note all of his accomplishments so quickly. Disability, LGBT, Women, Labor, and many other minority rights were all lectured on as a swift pace, but I felt they need the essence of each to really understand the civil rights movement. 1970’s, 1980’s, into Clinton’s first term in office. Lots of info and no time to teach it.

The kids had become accustomed to my pregnant moments. While in lecture I would get caught on a word. I would literally blank and could not remember the word. The kids were so sweet and they would say, “what does the word start with?” I would answer, “d”. Then a student would ask me to describe it. “It is like when you feel hopeless.” And almost in unison, they would say, “despair”. Then I would say “Ah yes, despair  thank you kiddos.” Then move on with the lecture.

This happened all the time andwith the most general of words. That is what made it so funny to me and to the kids. 🙂

By Tuesday, March 23rd, our doctor gave us the option of coming in to be induced the next morning or remaining at home to let, “nature do its thing.” We opted to get Getty out!

I said a final goodbye to the kids and staff at school as I was ready to become a mommy. The next step in my life. I was coming back of course, but for now I was off to give birth to a little girl already named, Getty Emelia Storm. Or what the kids had grown accustomed to calling her, Super Storm. 🙂

Getty’s movement was in overdrive and I was retaining water like the Michelin Man, if he was full of water, not air. No sleeping position was comfortable, nothing sounded good to eat, I lost sight of my feet and thought I had lost them forever by week 25. I was ready for pregnancy to be over, honestly.

The induction process started on March 24th around 7am to no avail. Nope, Getty did not want to come out at all. All vitals were great for both her and I. I wasn’t dilating any larger than 4 cm. So either I got a bad batch of “inducing medicine” or she simply wasn’t  ready.

My phone was making tons of noise all day. Everyone wanted to see Getty. My response was, “nothing yet”. I ate a lot of jello and juice. Nurses and midwife’s went on and off their shirts. Random floor doctors would come in and measure her and they thought for sure she would be around 6+ pounds.

By 12am March 25th my water broke on its own. In my mind I thought, “okay this is good, now it is only a matter of time.” I love how looking back on this experience makes me giggle, because I really had no idea what I was talking about. As I write this I am giggling and shaking my head at the same time. It is also making me think about our family history. Nothing has come easy for a person with our last name Mathany. Nothing has been easy, nothing has been handed to us, nothing seems to go as planned, but we survive. And here I am once again proving our last name to be true.

Contractions began around 3am. They hurt, but on the hurt scale I would say is was about a 4? The midwife asked if I wanted an epidural and I said no. I told myself that when it got to like a hurt #7 then we would just go for it. So I continued to lay down and I actually fell asleep.

Something happened between 3am and 7am. While I was asleep my contractions, pretty much went from a 4 to a 10! In the very least I could have had some warning. 🙂 So by 7am I was not asking the nurse, I was telling her to get the midwife, I was ready for the epidural.

What I did not know was that there was a protocol for getting an epidural. An order had to be written, the epidural guy needed to be found and put on my epidural schedule, he needed to come down with his “stuff”, and then, and only then would he be able to administer the goods.

While in the time I was professing I was a 10! and that I needed the epidural. It was a good hour until I actually got the shot. Again looking back, not to self, ask for it before you need it. 🙂 Noted.

By 9ish on March 25th things were feeling a lot better. I had already forgotten about the pain. What pain? My phone was still going off, wondering where Miss Getty was. I stopped answering the phone in certain situations.  Not to add drama or worry anyone, but she simply was not here and I was tired of telling them the usual line of , “not yet :)”.

By 4pm, my midwife thought that I should just push for the sake of pushing. “let’s see what happens” she exclaimed. Pushing was in full force. I gave it the old college try with no success. “well you did a good job, Getty just isn’t ready that is all.” she said as she removed her gloves, “let’s try again in about two hours, you get some sleep.” And so I did until about 5:30pm.

A new midwife came in and introduced herself. She was a retired Marine nurse and she was such a blessing. I felt an instant connection to her in many respects. It was almost like I knew, “this is the lady is going to help me get Getty out, even if she has to yell or command  her to come out. ” 🙂

I did not want to have a c-section. No real reason honestly. I think at this point it was more of a pride issue. I had been here for so long, I was in it for the long haul and dang-it, Getty was coming out the way I “planned” it. Of course if there was any harm of any kind to be had at any point in my pregnancy I would have done what was best for Getty. But at this point, all of her vitals were great and so we continued with the natural version.

Pushing started promptly at 1800, is what Midwife Jane called it. Man at this point, I don’t care what time she called it, I was in her military hands and I knew she was ready to help and complete this mission. So I pushed, and pushed, and pushed, etc. Getty was moving in the right direction, thankfully. The pushing continued until about 8pm, sorry, I mean 2000. At that point she said, “if she does not come out in the next 20 minutes we have to take you down and get her out the other way.” Our eyes gazed into each others. She had this look on her face as if to say, ‘dammit, not on my watch, this baby is coming out, Kate are you with me?”

I pushed like I had never pushed before. I was so in tune with the contractions that the nurses nor the midwife had to tell me when to push. I mean at that point, they could have just stood back and waited for Getty to come out.

At 8:16pm on March 25th our sweet Miss Getty Emelia Storm was born. She was gorgeous, she was 8.9 lbs, and she was finally here. So worth the wait.

I thanked the midwife for her encouragement and coaching abilities.  Honestly I thought if I didn’t get her out, she was going to take me out back and beat me once I was up to it. 🙂

Giving birth come in all shapes and sizes. This was our story. This is Getty’s story of how she joined our family. This was probably the most peaceful I have ever felt in my life. I was a mommy.

Getty’s 3rd Birthday is coming very soon. With every single day, month, and year she graces us with her beautiful eyes, her wonderful sense of humor, and her ever present grace, we are blessed.

So many milestones have been witnessed and with tons of hope and love, many more milestones still to come.

I love you sweet owl. You are my heart and the air I breathe. 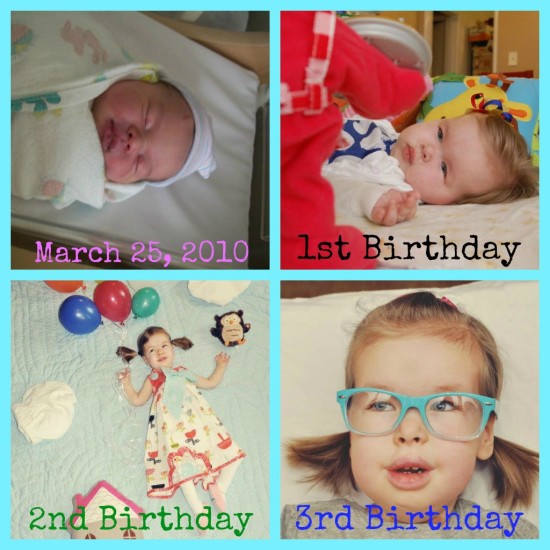