We are no strangers to fighting the medical bureaucracy to meet Getty’s needs. When Getty was diagnosed with Spinal Muscular Atrophy, with a dire prognosis of having no strength and being with us until only age 2, we swore we would provide Getty anything she needs to live the best quality of life.

Getty is almost 4 now and doing well with proper care, despite her lack of physical strength and the ripple effect from it. They were wrong about Getty’s life with SMA, and we have fought to prove them wrong. The latest fight on our agenda was for a power wheelchair approval, and we would not allow them to deny Getty the gift of independent mobility.

Getty cannot move herself, nor can she articulate words to let anyone know where or when she wants to go somewhere. We move her as best we can in ways we think will make her happy. How amazing would it be for Getty, at nearly age 4, to simply go wherever it is SHE wants to go? It’s no wonder she hooted and squealed as she drove a trial power chair, wide-eyed … even driving herself out the door.

Seeing Getty so capable and thrilled to experience independent mobility, there was absolutely no way we would back down in the face of the obstacles our provider put in her way. We argued, scraped, clawed, made seemingly endless phone calls and sent emails to anyone and everyone willing to help. We filed a grievance, did our own medical research, submitted nearly 80 pages of written argument, argued before a committee, and went up against Goliath for Getty to get her a chair. Our basic message: Getty deserves to “walk” like an able-bodied child.

About a week before Christmas, things did not look good. We were fairly certain the committee would deny the power chair, and we would be left looking forward to endless fights and appeals. We fired off one last ditch letter and hoped it was enough to tip the scales.

On Christmas Eve, Kaiser APPROVED Getty’s power wheelchair. The icing on the cake was a written APOLOGY for our “negative care experience.”

Receiving that letter ended a year-long struggle we took on for Getty. We were now finally able to step back and breathe, exhausted, realizing most of the major fights for things Getty needs are over and won. The power chair victory is possibly the last huge fight on the radar, and we greatly appreciate all the SMA warriors who joined her fight. THANK YOU!

Looking forward, we are so excited to see Getty driving herself around, going where she wants to go, and doing things she wants to do. We are elated Getty has strength and coordination to put a power chair in her reach. In a way, we feel privileged to fight for her.

We hope to blaze trails for SMA children who may follow Getty’s path. We draw on our experiences, passion, and skills to help other SMA families advocate for thier needs. We encourage not only SMA families, but anyone, to believe in the power of perseverance.

For years, we have been going up against Goliath — an enormous medical bureaucracy with a habit of issuing denials reflexively. The power chair battle alone consumed nearly a year all by itself. Through hard work, a refusal to yield, and tapping every resource and ounce of energy we could muster, we not only got what Getty needs but also an apology, as a nice Christmas bow.

Next step: Getting her own custom chair. 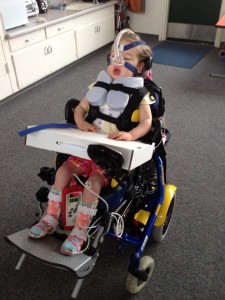