We have some very special friends in New Zealand. We met them around this time last year. We are both families affected by SMA. Obviously not the way we wanted to meet, but it is what it is and we are better people for it. Getty and Holly were fast friends. 🙂 Getty received a very sweet gift from our Kiwi friends a while back. The book is called, The Wonky Donkey. It is a very cute story about a Donkey. The story also has a song version of it as well. 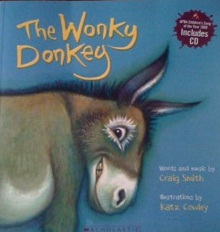 When we received the gift back in the winter we read it to Getty and her response was confusion. She really wasn’t interested to be honest. We had heard how much Holly liked it and we thought, well of course Getty will as well.  Um…….nope!

During book time every night I would sneak it in and still she would not be interested. What was it about this donkey? Then we played the song. It became very clear to us that it was us, we were the one’s boring her to new heights. It was our tone and the way we didn’t make it rhyme that made her disinterested. Oops! 🙂

The first time we played the song she was hooked. We could tell Getty loved how he sang very fast and upbeat. There are sounds of a donkey that makes her giggle and her eyes just twinkle. It just melts our hearts to see that twinkle.

So we decided to video Getty and daddy playing and singing while listening to the Wonky Donkey song. I’ll just say this, Getty knows exactly when the song will be over. Yep, that is all I am going to say. 🙂