It is easy to feel isolated with SMA. We don’t have SMA families as neighbors. You can’t just go somewhere to be surrounded by SMA families who offer their comfort and support. Most days are just so draining and overwhelming, there is little time or energy for outreach. Yes, SMA affects 1 in 6,000 children, but reaching out to and being with those families is very difficult.

SMA is different for all children. Obviously there are constants, but it still is the type of disease that is not cookie cutter. It affects families differently. SMA has a wide spectrum: we have met families who have lost their children very early, those who are transitioning their teenager into college, adults with SMA, and everywhere in between.

Most correspondence is through Facebook or SMASpace. Both places give us a way to meet the greater community, lend support, and exchange ideas on best practices. Virtual connection is fairly easy, but physical connection, which is very important, is very difficult.

We have been trying to plan a time to get together with a fellow SMA family not too far from us. Since a winter meet up season is likely out of the question, finding the best time to see each other while we are all planning our own family trips makes for difficult planning. Other potential set backs, like a high heart rate, low oxygen saturation, or just anything being not quite right, cancels the whole idea of meeting up.  To find a day to meet up, the conditions need to be just right. Yesterday was that day.

Getty had not seen Aaron and his parents for an entire year. In the van, we were reflecting on a year ago and we were just in awe of how things have changed. Not in a sad way, just taking inventory of what has changed.

I gasped at the thought that we had no suction machine a year ago.  The thought of not having that by our side 24/7 now … my goodness! Pretty much every other machine that helps Getty breathe, eat, and thrive was not a part of the equation a year ago. I remember very clearly being scared out of mind a year ago today. That is putting it lightly. I was terrified and grieving like I never knew a human being could grieve. I can see that so clearly, and in hindsight, wow that was horrific. A year ago, I was convinced that Getty wasn’t going to be with us very much longer — that was until we physically met the Phelps Family.

Just like the first day we met, we pulled into their driveway. I felt like I was home. The moment we met all three of them, I knew we were going to be okay. I knew Getty was going to be okay. I knew that our journey would be a long one, with Getty by our side. Meeting Aaron convinced me that Getty was going to be just fine. He is such a beautiful boy who is wise beyond his years and cared for by such diligent and thoughtful parents. He is such an intelligent kiddo who is also very silly, expressive, and dare I say, a flirt. 🙂

This Saturday would be extra special.  Miss Hayden and her parents were coming up from Madera to visit. What an absolute treat to have three SMA families all in the same house.

For lots of reasons, it is very difficult for us to have Getty around other kids. We were so excited for Getty to be have the opportunity to hang out with her peeps. Introductions began and Getty got to see Aaron after a full year. He is such a gentleman, and Getty is now such a little lady. My how much a year changes! They aren’t babies anymore.

Getty also got to meet Hayden. It was so breathtaking to watch Getty’s expressions. It was a lot to take in. She usually only sees Mark, Grammy, Miss Angie, and me on a regular basis. Now she is surrounded by so many new faces, but she took it in stride.

She really enjoyed spending time with Hayden and Aaron. Getty was so chatty and in good spirits while they hung out. I wish I knew what she was saying. I know she was happy, so maybe she was just making chit chat. Maybe she was telling the kids how hovering I am with her. 🙂 Yep guilty.

There is an unspeakable comfort when we spend any time with another SMA family. I wish I could explain what it is like. It is a comfort, it is an understanding, it is a common respect for each other and our kids, it is an immediate admiration for one another. It is almost like we are soldiers, fighting the same battle, when we get a day of leave to meet up and rejoice in the moment.

The weather was perfect, the atmosphere was perfect, the company was perfect, and memories were made, which makes for an absolutely perfect Saturday. Thank you Phelps Family for your wonderful hospitality and thanks to the gracious Calafiore Family for stopping in while on your big weekend trip. We are so inspired by all of you. 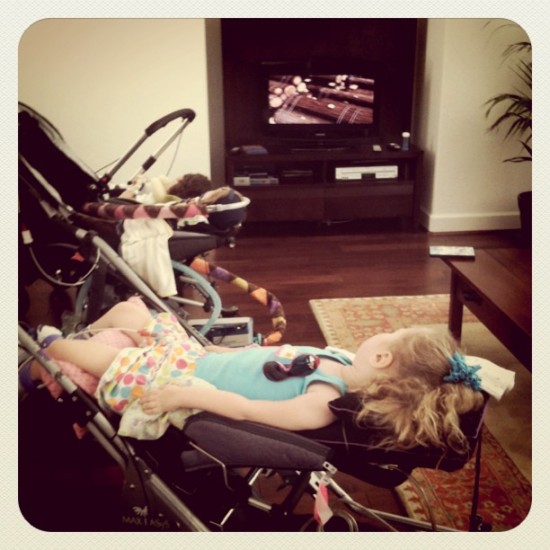 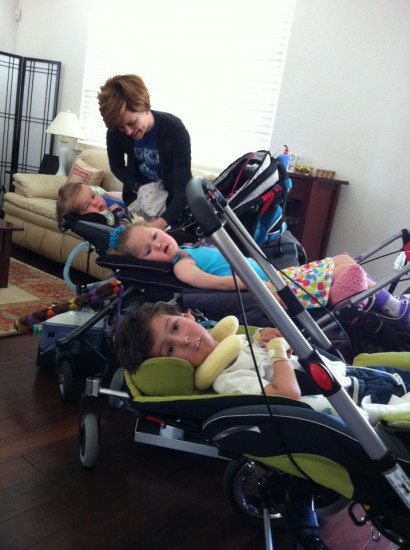