Last year around this time, the weather was absolutely gorgeous, like it is now. I was inspired by seeing so many SMA kiddos enjoying swimming with their families and really soaking up the sun and honestly taking advantage of the summer weather.

RSV Season is technically “over” after Memorial Day Weekend and from that time on it feels like a race to get in as much sun, activities, seeing family, experiencing life and slobbery dogs you can until October starts to rear its ugly head.

Although as a mother I have begun to make some concessions about Getty’s exposure during  next year’s RSV season, it will still be crazy to most people and it will indeed contain the incredibly insane cleaning protocols that have been instilled in our home and exposure to others.

Okay so going back to last year. I was fascinated by this particular pool. It was one of those soft pool contraptions that could be set up and taken down “easily”. I have those, “Getty should have this”, moments and we found one and I put the darn thing together that night. I was getting eaten alive by mosquitoes, but they were no match for my quest to get Getty into that pool.

Water was added that night and the idea was that by like two days it would be fit to jump in and experience our summer, poolside. On the first day of waiting for the water to get just right, we had Getty in her stroller in the backyard and some thing strange started to happen. Her heart rate began to elevate into the 140’s. Didn’t think much of it. Her O2 levels were fine and she did not seem uncomfortable. Then as I started to walk her around the backyard, her heart rate started to kind of spike into the 160’s and 170’s.

Getty had never been sick before. This roller coaster of HR numbers had us worried but not like crazy worried. We took her inside and tried a couple of things to see if the numbers would decrease. They didn’t and that night was our first indication that something was not quite right. She had been teething for the past couple of weeks big time and so we truly chalked it up to pain. Back and forth we went from Mortin to Tylenol and while it did drop it down some, something was just not right. Since Getty’s diagnosis I think Mark and I were just so sensitive to watching her O2 levels that the HR was one of those things that could be several different ailments or remedies, all we could not render.

Then two days later we were in the PICU and there we stayed for two weeks. Getty gallantly fought off her illness. Mark and I almost killed a few employees and I think we managed to get about 10 hours of sleep between the two of us. And all the while our pool remand in place, heating with every summer day.

So fast forward to yesterday. I decided to lower my standards. Did we really need a gigantic pool? Where on earth would this thing go anyway? And in a really weird way I did not want to sabotage Getty’s great health with the same pool. I guess you could call me a little superstitious.

So Mark ran to our neighborhood Lowes and he bought a cheap kiddie pool.

Added water to it and our backyard turned into a Hawaiian paradise for Getty. 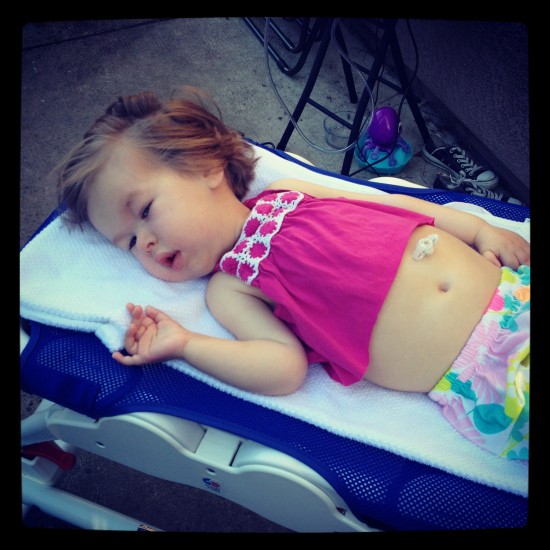 Getty’s makeshift bikini, she grew out of last years. 🙂 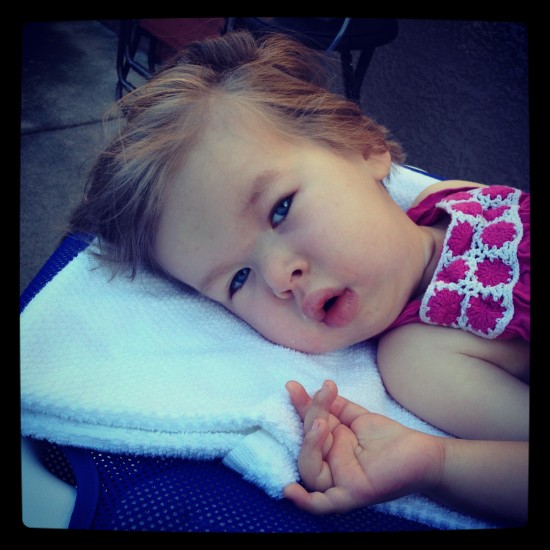 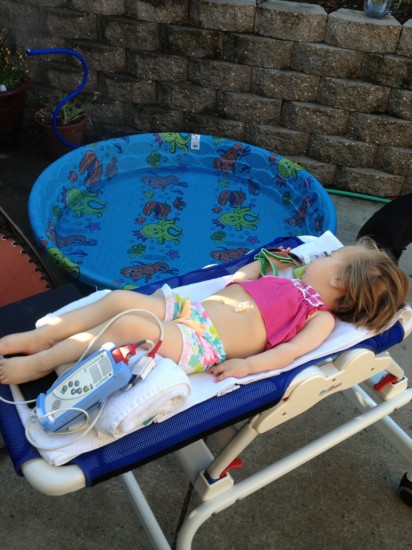 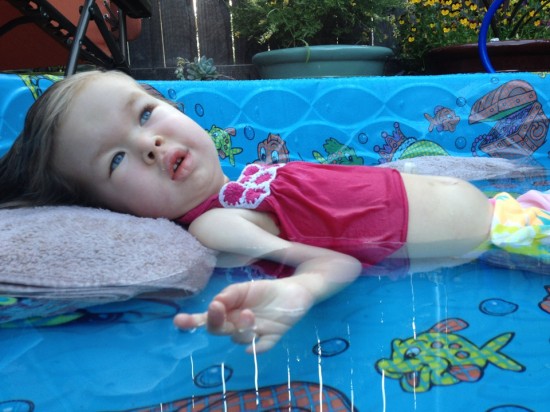 Trying to figure out if she likes it or not. 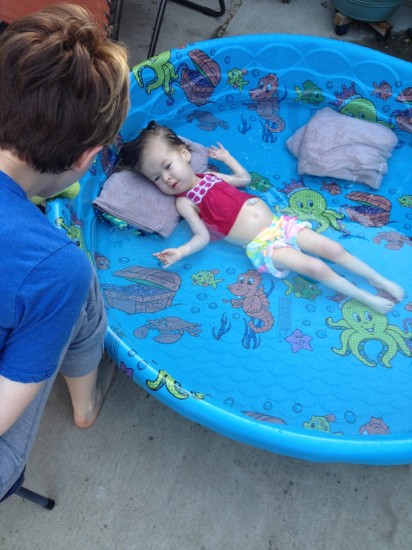 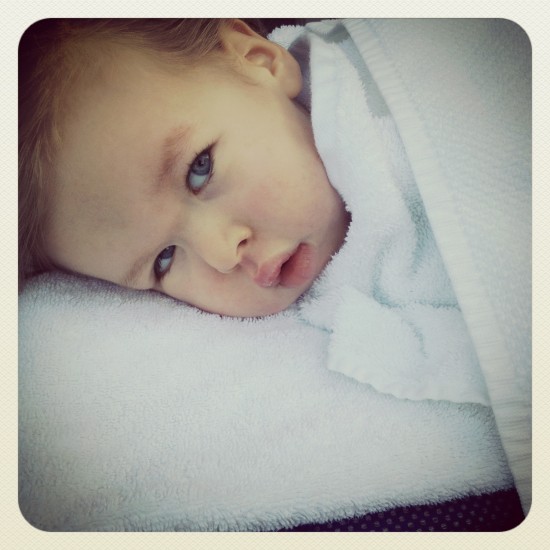 We had a wonderful time yesterday. Getty got a chance to experience something new and she truly enjoyed it. It was awesome to watch her move her arms and her legs and to do it all by herself. The water was a bit cooler than her bath time and so there were some seconds of surprise on her face. Then I think she realized that it wasn’t a bath and she was very happy. I asked her today if she would like to go swimming again and she gave me her intense look, which is code for “duh Mom.”

Mark, Cooper and I were able to also hang out poolside and enjoy the remains of the day, together as a family. It gave us a chance to kind of reflect on how far we have all come as a family since last year. Cooper still tried to eat our dinner, so he did not learn anything. 🙂 But it did give us pause to reflect on Getty’s continuing good health. SMA has a way of changing a person. Good or otherwise, one thing is for sure, we are all still here together and we are just so thankful to have our little mermaid with us.

Well time to fill the pool up again for tonight. Hope everyone had a great weekend.