From Kate:  I would like to wholeheartedly thank the Grubbs Family, Dutch Bros. Coffee, and our great Sacramento Community for helping raise $6810, in the Buck for Kids event on September 29th! It was a HUGE success and we are so thankful for all of the continued generosity of Dutch Bros. Coffee. Thank you for all that you do for local causes, such as ours. We are so humbled by your constant support and love.  Thank you to all for stopping by and purchasing a drink, or two. We are so thankful!  What I know for sure is that this holiday season we will be able to gift more iPads to deserving children and adults affected by SMA, and that makes our hearts sing!  Thank you all! 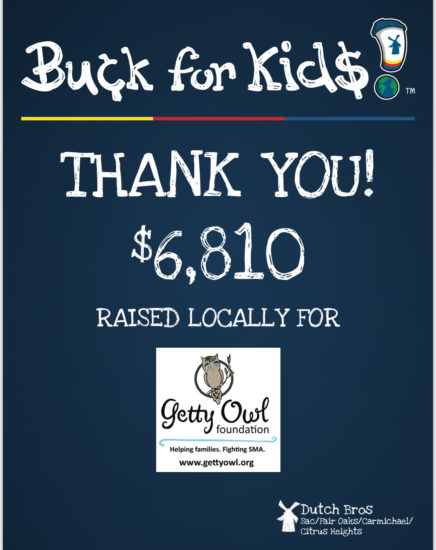 From Kate,  We are absolutely heartbroken to announce that one of our incredible SMA warriors passed away this past week. GOF board member Shannon, and her amazing husband, Randy, said goodbye to their little lady Reagan. We mourn the loss of Reagan and we hope that with time, comfort will come to Shannon and Randy and their extended family.  It has been difficult to put into words what has happened this past week. While all SMA children and adults are just the best human beings in the world, Reagan was a part of our innermost circle. With only a driving distance of forty minutes, we were able to have a more intimate relationship with the Sinkiewicz family. They are dynamic and fierce warriors for their Reagy. They dove into this abyss of what the SMA life includes and they just went in head first and never looked back. They brought the outside world to Reagan and she flourished. She was fulfilled, sassy, and extremely welcoming to anyone with her beautiful smile.  Thank you Shannon and Randy for sharing Reagan with the world. Thank you for welcoming us into your home and giving so many people a chance to meet Reagan. Thank you for allowing others to gain knowledge and in turn gain a sense of empathy that perhaps they never had before. Reagan had such an infectious way of gaining attention. Her eyes drew you in the moment of meeting her. Her smile and coos were mesmerizing and she was such a force of persuasion. Her spirit beamed and you knew that all was right in the world when you were with her.  We promise to forever care for you all. We promise to make sure that Reagan continues to be present in everything we do. We promise to make sure that our community who has held your lady in their thoughts, continues to positively make an impact.  It was excruciating to get the news of Reagan’s passing. It was difficult to come to realization that Shannon and Randy will not have the ability to love on her physically anymore. They just relished in loving her and giving her everything possible to thrive. They created a world that was full of wonder and excitement. Knowing it has been stripped away, it just isn’t fair. We miss her and we are just so incredibly sad. Just so sad.  To Shannon and Randy’s extended families we send our love and we stand with you during this time of grief.  Reagan, your beautiful spirit is in all of us. I can only speak for myself, but I have a feeling there are many people throughout the world that are moving forward with a little more purpose to make this a better world. An increased purpose to make sure that everyone feels included. An increased purpose to make sure that your life and your story will continue to be told. I can’t tell you how many times we have been greeted by a curious hummingbird. They hover just long enough to say hello and then they are gone. I feel like it is your way of saying hello. One actually hovered near my face and it brought a smile, one that I had lost the last week. Thank you for bringing it back.  If you would like to help support Shannon and Randy during this time, please consider donating to their fundraising page. Click HERE for more details. 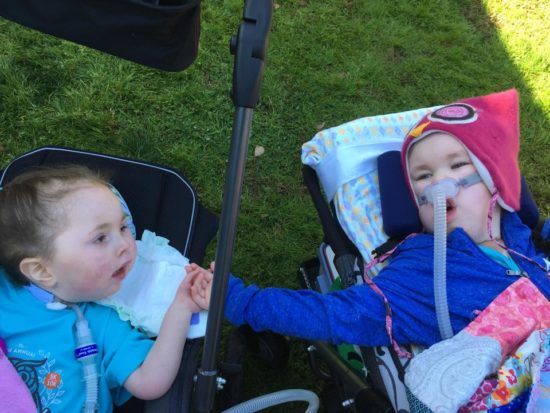 Back to School Giveaway Announcement!!!!!!

From Kate: I would like to thank all of the awesome families who entered each and everyone of their amazing kiddos! I am so happy to report is that after the giveaway was announced, I had two really incredible donations that helped us up this giveaway from 6-14! People are just good and I would like to thank both the ever present and supportive, Bauernschmitt Family and Hunter Has Hope Foundation for their kind contributions to this giveaway!  I hope to make this giveaway an annual event. We hope to increase the amount next year. I would like to introduce you all to some really fantastic kiddos that will be receiving our “Oh, The Places You Will Go!” Back to School Giveaway.  To all of our SMA kids, have a terrific school year and take life and your studies to new heights! 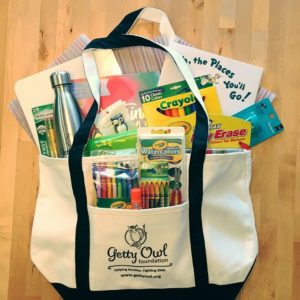 Contents of the Bag:

Dr. Suess’s Oh, the Places You Will Go!

Back To School Giveaway!

From Kate:  Getty started school on August 16th and she is loving 2nd grade! I will post an update about her first few weeks soon. As I was thinking about her starting school again, it got me thinking about the kinds of educational tools and supplies we have been using that have really helped her and helped us remain as organized as possible. Many times, school supplies do not completely support children that may have some physical challenges. Gripping, pushing, cutting, and lifting, to name a few, can all be very difficult for children with SMA. Luckily with enough time to explore, you can find just the right items for success.  Once a SMA child enters the educational system, they are granted an Individualized Education Plan, or IEP. Every IEP is individually evaluated for that particular student. Without getting too far into the in’s and out’s of this, what may come of it are resources for this particular student. Scheduled meetings, evaluations, Physical Therapy, Occupational Therapy, Speech, etc. I guess what I am eluding to it appointments, lots and lots of appointments. I learned very early on that I had to write everything down into a calendar/planner or it would completely be lost within a minute in my head. 🙂 That planner goes with me everywhere now, absolutely everywhere. 🙂  Okay so this brings me to the GIVEAWAY part of my post. I want to help 8 SMA families with a few helpful items for their child’s first few years of school.

What is included and why?

Look below for details. 🙂 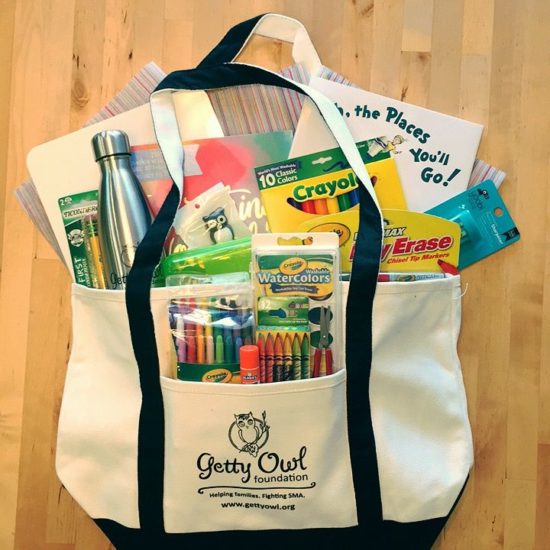 -Twistable crayons and colored pencils. No need to sharpen or remove silly paper.

-Flash Drive to save and modify files for IEP and correspondence records.

-White Board and dry erase markers for quick communication and decisions making.

-Tote to put stuff in. Lots of room for stuff. 🙂

-Last but certainly not least, the book, Oh The Places You Will Go!, because kid, you are going places! 🙂

-I am looking for a particular demographic for this GIVEAWAY. I would like to help SMA families that just entered the school system.   -So only SMA children entering: Pre-school Kindergarten 1st Grade *I hope to do another for older kids, but for now, just this demographic. Thank you.    -One entry allowed for each child. Please include their name and grade they will enter. Please attach a picture so I can showcase them if selected.    -Please email all information to hoot@gettyowl.org    -Giveaway Recipients will be announced Tuesday, August 29th @ 6pm. Enter now! 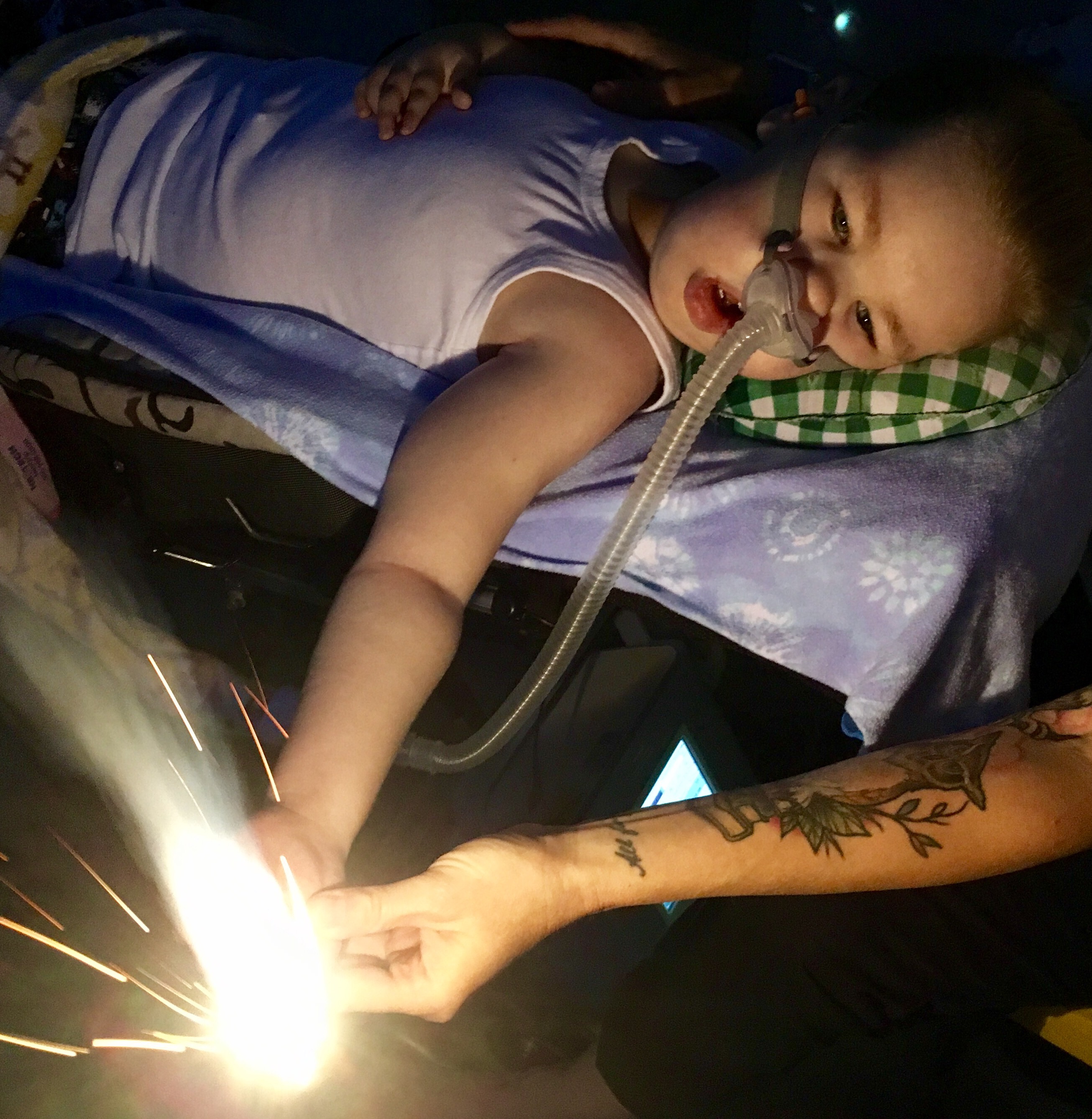